*Before I leave this life of my own free will and with my clear mind, I feel the need to fulfill a last duty: to address deep thanks to Brazil, this marvelous country that has given me and my work such a friendly and hospitable rest. Day by day I have learned to love it more and nowhere else would I have preferred to build a new existence, now that the world of my language has disappeared for me and my spiritual homeland, Europe, has destroyed itself.

Thus Stefan Zweig voluntarily left this world on February 22, 1942, leaving this note of admiration and thanks to Brazil, which had welcomed him in his last years of wanderings.

Born in 1881 in Austria, this intellectual from a good Jewish family fled his country in 1934 under the pressure of Nazism. He took refuge in London from where he continued his brilliant literary career. He fled again to the United States, a country he did not like, returned to London and finally went to South America in 1941, in particular to Brazil, a country to which he had been invited in 1936.

Among his numerous literary productions, « Brazil, land of the future » was published in 1941, one year before his suicide. The work is organized in four parts, History, Economy, and Culture. Then the country itself, Rio, São Paulo and other cities and regions that he knew and sometimes just passed through. 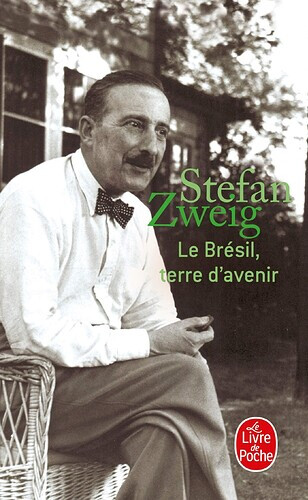 History since the invention of Brazil in 1500 by Pedro Alvarez Cabral is an interesting read because it is condensed, documented, and easy to read, this is the great talent of literary geniuses. A short book of history, hardly romanticized.

The Economy, intimately linked to History in Brazil, is that of the great cycles of sugar cane, gold, then coffee, then rubber.

Culture. What could a western literary genius say about the culture of Brazil? That he misses libraries and books; that he misses his great friends of the past like Sigmund Freud, Arthur Schnitzler, Romain Rolland, Richard Strauss, Emile Verhaeren and many others.

Commentators of Stefan Zweig, and of this book in particular, have often emphasized the author’s blissful and naive admiration for this new country, so far removed from his native Austria. Prodigious naivety to see there a country of cocoon where racism was absent, where all the colors of skin lived in harmony, where the negroes descended from slaves were happy, blissful even in their favelas, knowing to be satisfied with the essential. To the point of seeing a little father of the peoples in Getúlio Vargas, President of Brazil, in his dictatorial period since 1937. This tropical country, where he saw no personal future, he saw it as a life raft for the dying Europe. The old European civilization was dying under Hitler’s boots and Brazil was the salvation. He didn’t live to see some Hitler fanatics taking refuge in Brazilafter the war, and it’s better that way.

Let’s sweep away the hypothesis of a naive and complacent Stefan Zweig, he was too intelligent and too honest for that. I have another hypothesis.

His Brazil was indeed a land of the future, like the raft of the Medusa was for the shipwrecked of the Medusa frigate. People were dying slowly away from civilization, they were destitute, all colors mixed, but they were alive when the frigate had sunk. The slim hope of the future against the certainty of the past.

He loved the Brazil of despair. But not only that. Like many intellectuals, he had been impregnated with the myth of the good savage and the small part of naivety that could be reproached to him was this. The deprived of everything cannot be bad nor wicked, since they are also deprived of wickedness, the characteristic of the civilized human being is to be denatured by the civilization.

It is a dreamed Brazil that he describes, his Brazil, his life raft in which the European fascist storm had thrown him. Had he been more just and more severe with reality, he would have spoiled his ultimate refuge. One does not saw off the branch on which one has taken refuge.

« Brazil, land of the future](Amazon.fr - Brésil, terre d'avenir - Zweig, Stefan - Livres) » remains a classic, an almost obligatory passage for those who love Brazil. Put it back in its time (the end of slavery was not so far away in 1941), imagine yourself having had the destiny of Stefan Zweig, and let yourself be carried away in this land of plenty, that Stefan had imagined without ever reaching it.